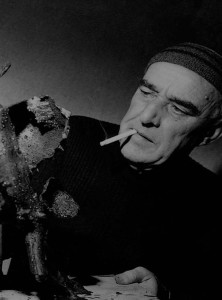 Marcello Mascherini was born in Udine on September 14th, 1906 and was renounced by his father. In 1910 his mother moved to Trieste and during the First World War took refuge in Isernia, where Mascherini learnt the first rudiments of sculpture in the workshops of local able craftsmen and took a Diploma at the local ‘Regia Scuola D’Arte’ relating to this industry. Having returned to Trieste (in 1921) he enrolled at the Istituto Industriale Alessandro Volta, attending courses in ornamental sculpture under the guidance of sculpture Professor A. Canciani, later replaced by F. Asco. It was in fact in the studio of the latter, only three years later, that Mascherini reworked the style of the academies of Vienna, Venice and Rome, to which Canciani was also connected, developing his own language which was more deeply rooted in the quality of expression. In December 1924, upon graduating, he held his debut exhibition, presenting Chalk Works to the ‘Circolo Artistico di Trieste’. In 1928 he created ‘stucchi’ for the ‘Politeama Rossetti’ and was commissioned by architect U. Nordio to decorate the new Palace of Justice, for which he formed some great sculptures of jurors (1934). Thanks to his two profiles in bronze of the Duke and the King made for the ship ‘Victoria I’ (1930) Mascherini started a profitable business decorating ships. In 1934, following his rise to national acclaim through participation in several large architectural sites, Nordio invited him to collaborate in the tender for the ‘Palazzo del Littorio di Roma’. The Thirties were studded with success for Mascherini, culminating in the ‘Premio Unico dell’Accademia D’Italia’ for sculpture, awarded by Mussolini himself on April 21, 1940. This award crowned a series of international awards that had begun with the gold medal at ‘VI Mostra Regionale Giuliana di Trieste’ (1932) and continued with the silver medal at ‘V Triennale di Milano’ (1933), first prize for sculpture at ‘VII Interprovinciale d’arte di Trieste’ (1933), the award at ‘Mostra dell Aeronautica di Milano’ (staged by Gio Ponti) in 1934, and with the medal for the centenary of the Lloyd from Trieste (1936). These prizes preceded a series of invitations and international successes: from the Exhibition of Italian art in Budapest in 1936 to the assignment for the construction of one of the statues of the pediment of the Italia pavilion at the Universal Exhibition in Paris (for which he was awarded the Gold medal) in 1937, and again to the prize in 1937 at the Exhibition of Italian art in Paris. To sanctify him in the Hall of Italian sculptors a monograph was published in 1945 by A. Pica, with a foreword by G. Stuparich, he was also appointed in 1948 as a member of St. Luca, and finally participated in 1949 in the exhibition of Italian art of the twentieth century at the Museum of Modern Art in New York. In 1967 he moved to Sistiana, in the Karst region, continuing to exhibit from there. At an exhibition in Milan in 1970, in the Corriere della Sera (11 May 1970) D. Buzzati noted how the creative fervour of Mascherini came specifically from the vegetation of the Karst: ‘It seems to me that the greatest inspiration comes from little trees, woods, shrubs luckily clinging to stones […] plants, blown by the wind of the area to create life and movement. ‘ In the seventies Mascherini continued to work, and lent himself to the creation of imposing public monuments. He died in Padua on 19th February 1983.