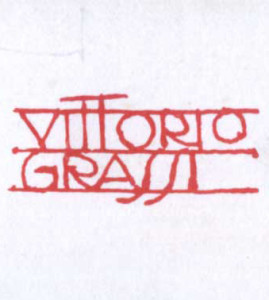 Vittorio Grassi was born in Rome on 17th April 1878 to Giovanni Battista and Angela De Marchi. Following his father’s wishes, he was employed at the Bank of Italy where he discovered a way to make tamper-proof paper money. In 1902 he exhibited some of his paintings at the ‘Galassi Paluzzi’ in Perugia, and the following year he showed the same works at ‘Palazzo Delle Esposizioni’. In 1904 he began associating with some of the prominent figures of the art world in Rome, particularly Diulio Cambellotti, Giacomo Balla and G. Prini, who introduced him to ‘Gruppo dei XXV della Campagna Romana’. In 1908, alongside Cambellotti, Bottazzi, Marcucci and Menasci, he founded the magazine ‘La Casa’. In 1911 he participated at ‘Mostra Della Topografia Romana Antica’, which was held in the rooms of Castel Sant’Angelo, presenting a painting of a great panorama of the medieval city. In the same year, during the Roman celebration of the fiftieth anniversary of the Unification of Italy with Rome as its capital city, he made several ceramic panels for ‘La Casa’, a cottage in Lungotevere delle Armi. In 1912 he staged Macbeth at ‘Teatro Costanzi’ in Rome and also participated at the First ‘Mostra Della Vetrata Artistica’, where four stained glass windows of his design were shown. In the same year he designed some ceramic vases for Richard-Ginori adorned with frogs and snakes that were exhibited at the Venice Biennale. In 1913 and for the next two years he took part in the ‘Mostra Della Secessione Romana’. He also became the head of ornate engraving and scenography at ‘L’accademia Di Belle Arti’ in Rome. In 1915 he decorated the Italian pavilion at the International Exhibition of San Francisco. In 1921 he was called to illustrate the book Vita Nova by Dante Alighieri for ‘L’istituto D’Arti Grafiche’ in Bergamo. In 1923, together with Giovanni Prini, he decorated the hall of Music at the International Exhibition of Decorative Arts in Monza, and at the same exhibition in 1925 he decorated ‘Sala Degli Abitatori Della Campagna Romana’. In 1937 he became artistic director and head of Illustration for ‘l’Enciclopedia Treccani’. He died in Rome in 1958.