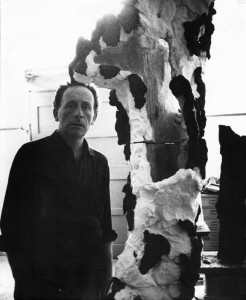 Leoncillo Leonardi was born in Spoleto on 18th November, 1915. In 1926 he enrolled at ‘Istituto Tecnico G. Spagna’, where his father had once taught. After failing his initial course he spent some time moulding clay, and following recommendation by the Calabrian sculptor Domenico Umberto Diano he joined ‘Istituto d’arte di Perugia’ in 1931, which he attended until 1935. It was during 1935 that he moved to Rome and met up with his older brother Lionello, who was teaching literature at religious institution ‘il Collegio S. Maria’. It was during these first years in Rome that he created his first notable works. In 1936 he came into contact with ‘Galleria la Cometa’, a meeting place for young artists such as; Mario Mafai; Antonietta Raphael; Corrado Cagli; Mirko and Afro Basaldella; Pericle Fazzini and Marino Mazzacurati. Although he drew deep inspiration from contact with what was called the Roman school, he spent several years working alone in his studio. In 1939 he left Rome and moved to Umbertide in Umbria, where he married Maria Zampa and had two children, Daniella and Leonetto. In Umbertide he came into contact with the ceramics factory owned by Settimio Rometti, which had a few years earlier been managed by Cagli. Here he perfected his knowledge on technical ceramic materials and their cooking and established a working relationship with Rometti, in whose furnaces he created sculptures of considerable size. In 1940, upon invitation from Gio Ponti, he took part in ‘VII Triennale di Milano’, sharing the room with S. Fancello and winning the gold medal for applied arts. In 1942 he returned to Rome where he taught plastic ceramics at ‘Istituto Statale d’Arte’, at which he stayed until 1952, working alongside Afro Basaldella, E. Colla and Fazzini. In the summer of the following year he introduced a series called ‘Mostri’ as part of a collective exhibition of young artists (including T. Scialoja, D. Purificato, G. Turcato & E. Vedova) at the gallery ‘La Cometa’ in Rome, receiving much acclaim. In December 1944, following a period of profound reflection, he began a collaboration which lasted several months with Roman periodical ‘La Settimana’, which hosted his drawings and above all his portraits of intellectuals. After this period he went on to exhibit at the Venice Biennale in 1948 and 1950 with the support of G Marchiori. The early fifties were an extremely productive time for Leonardi, and the fruits of his labour were also plentiful. In 1951 he won first prize for a garden sculpture at ‘II Mostra nazionale della ceramica’; in 1953 he obtained ‘il premio acquisto’ at The Art Exhibition of Spoleto, and in 1954 he won first prize at the XII National Competition of Ceramics in Faenza. In March 1957 he held an independent exhibition at ‘Galleria La Tartaruga’ in Rome, and in the same year he completed a decorative panel on the topic of work for the entrance of the headquarters of the ‘Istituto Nazionale Per La Previdenza Sociale’ in Ferrara. In 1959 he participated in the eighth Quadriennale in Rome, and in the same year he won first prize at ‘II Mostra Nazionale Della Ceramica E Dei Lavori In Metallo’ in Gubbio. In 1968, he exhibited at the Venice Biennale, where he set up his works of the last decade, hiding his sculptures with plastic sheeting as a sign of adherence to the protests of the young artists of the time. He died in Rome on 3rd September, 1968.